Come with me while I journey as an Initiate through the Feri Tradition of Witchcraft - a shamanic path of fey sorcery; a martial tradition of magic.
Any information deemed to be secret by any lines will not be found on this blog.

For months I have felt the call of Oshun...She is the Orisha of the rivers and the sweet waters, and She rules over love, beauty, prosperity, and the things that make life worth living. I have been enchanted by Her dance, heard Her song call to me, and sought Her in visions.

The main reason I did not actively work with Her was a fear of cultural appropriation. Who am I to work with an Orisha who is outside of my "culture" or tradition? Well, if I was putting myself forward as a practitioner of Lucumi/Santeria and as some kind of authority figure, THAT would be appropriation. I am doing neither of those.

I do not intend to work with Oshun in the same way a follower of Lucumi would, because I simply do not share that religion and I am not part of that particular culture. I am a Feri Witch, and this is the paradigm I work in.

Victor Anderson said that all Gods are Feri Gods, and I take this to mean that we can respectfully approach any God we wish to form relationship with. Working with Oshun is not different than working with Ganesha, or Hecate, or Brigid. Most Neo-Pagans would happily work with any of these Gods but not claim to be Hindu or a Greek/Celtic reconstructionist.

Yesterday, I couldn't resist Her call any longer, and I built Her a shrine. I don't know where my work with Oshun will take me, but for now it seems my soul needs something that only She can provide. I hope I am up to the challenge.

(Here is my shrine to Oshun...I have used a veve to Erzulie on a drum to Her. I know, I am mixing Haitian Vodou into the mix here too, but I got a "hit" and ran with it.) 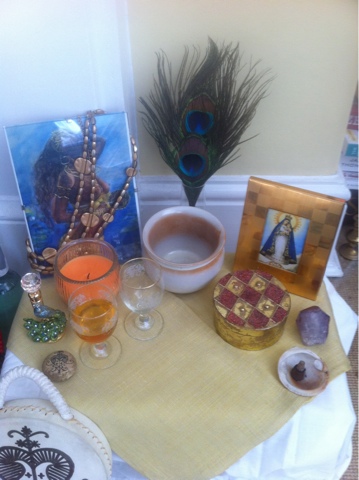 After reading a post by my good friend Paolo over at the Rose of Jericho blog on the use of seals in hoodoo and conjure, my interest was piqued. I have often been fascinated by intricate seals found in old grimoires, but I (incorrectly) assumed I would have to go through a process akin to the Abramelin Work for them to have any juice.

So, Paolo's post was refreshing. I duly bought the Key of Solomon (edited and translated by McGregor Matthews) and went through the different seals. Now...these are planetary seals, which do indeed deal with the "spirits" of the planets. However, in my mind, they provide a key to a specific vibration of planetary energy. If you want to call that a spirit, that's fine.

I have been having some health problems with my stomach, so I found the second Pentacle of Mars, which is used against "all disease". I copied it out in red ink on green paper, while chanting the appropriate versicle. Once I'd finished, I did a name paper on the back and dressed it in Healing Oil (in a five-spot or quincunx). I then affixed a dressed blue candle in the centre of the seal, lit it and chanted the versicle again before binding the spell and letting it do its work.

A day later, and my stomach problem has all but gone. 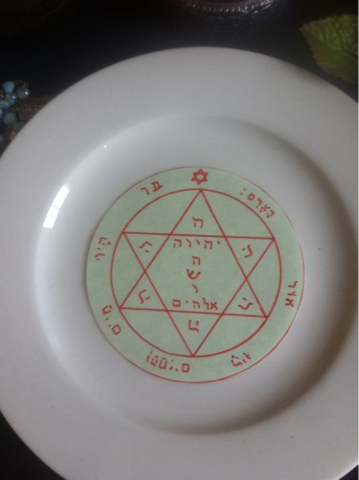 Posted by Harlequin at 07:37 No comments:

Yesterday's Practice is not Today's

Daily spiritual practice is a core strength of Feri. It is my daily connection with my own divinity and the Star Goddess that enables me to function as effectively as I can each day. My current practice (which evolves regularly) had been stripped bare. I light my candles, offer incense and water to my Gods, do an integrated kala and Ha prayer, then sit for 20 minutes. The last part I term "sitting in wholeness" because I attempt to be aware of all my parts as they are in the moment.

My daily practice is simple, but not easy.

The truth is, our expectations of what a daily practice should entail colour our experiences and sometimes keep us from plumbing the true depths of our souls. I have a persisting image of what a "real" spiritual person (not me!) would experience, and I try to emulate this, which is not correct.

Sure, sometimes I do experience moments of utter bliss and connection, but more often than not it is a subtle joy, a knowing that I am doing what I can each day. This morning, for example, my practice was HARD. I struggled to fill my kala cup with energy, and the visualisations I've used for years just wouldn't come. My "sitting in wholeness" was awful, with my mind racing towards what I'm doing tomorrow as well as possible occurrences.

Then I realised - in my practice I strive to bring all of my parts into wholeness. I am currently recovering from a stomach bug, I barely slept last night, and I had a guest for three days, during which time I couldn't do any practice whatsoever. No wonder I was out of balance today.

When I finished my attempt at spiritual practice, at first I was wistful and nostalgic. Last week I could get into the flow of my practice with no difficulties, and sitting for twenty minutes did not seem like enough time. But I then came to an understanding - I tried my best today. It would have been easy to stay in bed and catch up on sleep. It would have been easy to go and have some food rather than meditate. The important thing was that I showed up to my altar no matter what. I honoured my Self and my Gods by simply being there.

In the Reclaiming strand of the tradition in which I was initiated, the word "priestess" (which is used for either gender) is also used as a verb; to priestess. Anybody can priestess, not just bona fide initiates with years of intensive training under their belt. This is both a strength and a weakness of Reclaiming, but that's a subject for another post!

But what does "to priestess" actually mean? In the group rituals I have participated in over the past few years, several people have exemplified the qualities necessary for an effective priestess. I think back to my first Witch Camp, with Dawn Isadora talking in ritual about the Goddess in an intimate way, simply referring to Her as "She". My second Witch Camp had four amazing priestesses aspecting the Star Goddess and opening up the vortexes of power.

Then, there is the daily, mundane aspect of priestessing which I am currently involved in. Me and one of my initiators are team-teaching three students via distance teaching. Part of this is agreeing to meet for lesson planning and other details which aren't as glamorous as aspecting in a huge public ritual.

Nevertheless, this is all part of service, which is essential to good priestessing.

Potentially the most important role of the priestess is the ability to open the gates, to provide a space for others to experience the magical, the numinous, and the divine.

Priestesses are the holders of sacred space.

(As an aside, I also believe that when two (or more!) people have sex, they are priestessing each other - they open the gates for the other lover to experience the deep connection that sex can provide.)

Victor passed on two Pentacles in his Feri teaching that have also been used in its offshoot, Reclaiming: the Iron and Pearl. These Pentacles are considered core tools of both Feri and Reclaiming and I believe their main use is to bring us into right relationship with ourselves (Iron) and the world (Pearl).

Now, there are dozens of ways to work the Pentacles and to strive to be "on the Points" but I would like to offer an exercise I have developed which emphasises the unity of the Points as they are channeled and held in the body.

Before the exercise, I would like to offer a brief exposition on how I view the Points. For me, the core energies of the Iron and Pearl are Sex and Love, with the other four points flowing out of and into these topmost Points. The other four are almost like extensions, extrapolations, or supporters of the core energies of Sex and Love, which are the soul and substance of God Herself.

1. Connect with the energies of Sex by placing your hands into your groin area (or whatever other part of your body you associate with Sex).

3. Visualise some energy flowing from this central Sex channel to your left hand side, forming a crackling red ball of energy. Name this ball of energy "Self".

4. Repeat this with the other points, with Passion behind you, Pride to your right and Power before you.

5. Once you have the four strong stars around you and a nicely flowing central channel, bring the four stars and the channel into your body so it settles in your blood, releasing any excess back into the earth.

6. Repeat this procedure with the Pearl Pentacle, but place your hands on your heart to connect with Love. The energy should run a pearlescent white. And, rather than letting the Pearl energy settle into you after you have run the Points, send it out to the world as a blessing.

NB As a variation, you can run the Pearl directly "over" the Iron and then blend them together to form a copper channel, in reference to the copper decagram.
Posted by Harlequin at 16:34 No comments:

Love is the Law

From meditation on the train (where I do my best thinking): "The four powers, to know, to will, to dare, and to keep silence are held and united by a fifth: to love. All magic should have it's motivation in love, whether love for self or love for another (which are the same thing)."
Posted by Harlequin at 12:38 2 comments:

Harlequin
North London, United Kingdom
Welcome! I am a Witch studying primarily the Feri Tradition of Witchcraft as brought forth through Victor and Cora Anderson. My formal studies also incorporate the Reclaiming Tradition (which has roots in Feri), as given to me by my teachers. My practice focuses on the core rites of Feri with much devotional work, particularly the cultivation of ecstasy within a state of Alignment. Added to this are my interests in Tarot, Santeria, Qabala, Western Mystery Tradition and other related fields.