Come with me while I journey as an Initiate through the Feri Tradition of Witchcraft - a shamanic path of fey sorcery; a martial tradition of magic.
Any information deemed to be secret by any lines will not be found on this blog.

The Divine Twins in the Tarot - The Fool

The Fool is essentially a paradox: it is the first card, yet it is unnumbered. This Zero is the ground of being, the womb of God Herself. Indeed, Lon Milo DuQuette has stated that the Fool is the only real card; all other cards exist within the Fool. The Divine Twins are as yet undifferentiated and unborn. They are still in utero, being perfected into God with Their birth. The Twins are on the cusp of being born and manifest in the world.

Again, paradoxically, the Fool is both part of the world but not of it. He stands upon the edge of a cliff about to begin his journey, neither on the ground nor in the air. The Divine Twins are often seen as the writhing serpent (Earth) and the bright bird (Heavens) who come together to form the radiant Peacock Lord, Melek Ta'us. The Fool is a symbol of this alchemical union, and indeed his clothing calls to mind both wings and a feathered crown.

The Fool here is also the human being beginning the spiritual journey. The Great Work, the Knowledge and Conversation with the Holy Guardian Angel, is the ultimate spiritual goal of each practitioner. In my line, the Godsoul is a fractal of the Divine Twins - we are each a reflection of Their birth, division, courtship, and union. The Godsoul rests above the Crown and is allied with the Sun, which can be seen in this card slightly above the Fool's crown.

The Divine Twins ask, "What is your potential?"
Posted by Harlequin at 12:30 No comments:

The Divine Twins in the Tarot - A Series Introduction 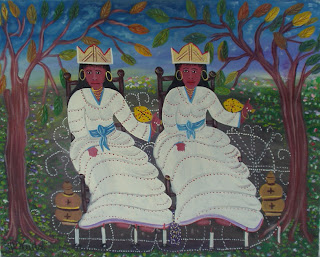 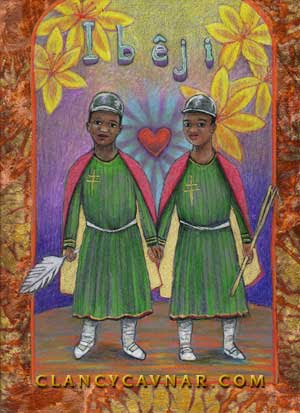 We find the Divine Twins in several mythologies but personally the spirits I am most attracted to (apart from Melek Ta'us!) are the Marassa Jumeaux from Haitain Vodou, above, and the Ibeji of Lucumi, right. Both of these Traditions have influenced the Feri Tradition and I find it interesting that the Twins in both Vodou and Lucumi are called very early on in ceremonies. Victor said that in Vodou, the Twins were "the first issue of the outer dark", which is a gorgeous poetic description of the Twins.

The purpose of this series is to explore the expression of the Divine Twins through the Major Arcana of the Tarot. The Majors are twenty two cards (a very Twin-like number) representing the totality of archetypal human experience, with the Minors being the individual specifics. Because the Twins are so huge, yet ultimately intimate and dwelling within each of us, I have chosen to explore Their narrative through the Majors. The Tarot is a huge source of wisdom and the full scope of meanings, symbolism, and lore is beyond the scope of this series.

Posted by Harlequin at 11:13 No comments:

Here is a painting called "Kala". The rite of Kala is one of the most vital of the practices we do in Feri and I was inspired to paint this recently, finally completing it tonight. 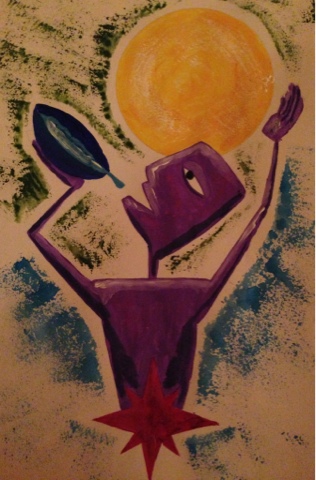 Harlequin
North London, United Kingdom
Welcome! I am a Witch studying primarily the Feri Tradition of Witchcraft as brought forth through Victor and Cora Anderson. My formal studies also incorporate the Reclaiming Tradition (which has roots in Feri), as given to me by my teachers. My practice focuses on the core rites of Feri with much devotional work, particularly the cultivation of ecstasy within a state of Alignment. Added to this are my interests in Tarot, Santeria, Qabala, Western Mystery Tradition and other related fields.